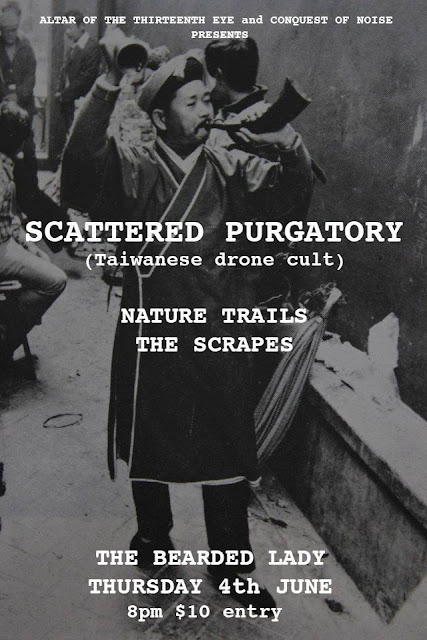 Posted by the Scrapes at 3:42 PM No comments:

You must be made explicitly aware that SATURDAY 23 MAY at Rocking Horse Records we will be doing an instore performance, FREE and ALL AGES with the fascinating Taiwanese ritual droners SCATTERED PURGATORY

DETAILS are in the gig section of this site AND on this little image here:

We will then be playing a gig at THE BEARDED LADY on 4 June with Scattered Purgatory once more. More details to be added to the GIG section shortly.

Thanks to all who came to the People's Republic of Australasia in Sydney on Sunday evening. Was a fantastic night and included a little impromptu collaboration between The Scrapes and Tony Irving as well. Special night. Will have some documentation to hand of it all soon enough.

The biggest news on our planet is this....CONQUEST OF NOISE are proud to announce that The Scrapes new album The Songs of Baron Samedi is now up for pre-order in two formats:

Looks like pre-orderers also get a digital version of the album in 24 hours after ordering so get in there.

Soft Abuse records also tell us that the tape version of the album will be coming soon too....more on that soon.

We also have a new gig announcement or two to make AND we will be performing an instore with visiting Taiwanese ritual droners Scattered Purgatory at Rocking Horse Records, Albert st, Brisbane on Saturday 23 May in the afternoon.

Will be playing with our old friend Jackson Reid Briggs in June as well....but there will be more announcements on the live front very shortly mark our words.

Here's some more samples from the new album:

Posted by the Scrapes at 1:53 PM No comments:

A Special Transmission from the People's Republic of Australasia

They’ve been with us 3 times before, but it’s nearly 4 years since we last saw them.
They finally have a new record about to be released,
and they’re coming to Sydney for this special one-off event with a very special guest...
If you haven’t seen this wonderful duo before, don’t miss this.

THE SCRAPES
plus TONY IRVING