Received a very rare non-spam comment the other day from Brendan T who runs a great blog called Sonic Masala...nice one man here it is:

Has some nice little write-ups about Brisbane bands and other great groups like Gnod, Expo 70 etc. Also has said a little about The Scrapes and about another band Ryan and I make a racket with Nikko.

I hope you won't mind Brendan but I liked your write-up about we Scrapes from last year so here it is for all to read easily but do visit his site as it looks great!

"These boys from Brisbane wont Scrape by for much longer...
I havent heard anything about these guys, but a passing reference to both the Dirty Three and the Drones was more than enough impetus to delve further. The Scrapes hail from Brisbane, have a debut LP Early Mourning Blues out, and sound amazing. They played at the same venue that Gareth Lilliard of the Drones did a solo gig at whilst I was in Brisbane - if Id known more about these guys I would have stuck around a little bit longer! Check out the live video of album closer 'Antarctica Beach' and join the bandwagon of fans that must surely be following these guys' progression with bated breath..."

Thanks for the kind words man! See any of you who bother to read this space on Thursday. I'm off to blow my mind with Eddie Hazel and luke-warm chai...yeah....

Adam
Posted by the Scrapes at 5:14 PM No comments:

Swan Districts from Adelaide....see below for more
The Scrapes

Cartel
Caxton st, Paddington, Brisbane, Australia
It shall be FREE
Show up around 7:30pm
Scrapes on at 8pm
Districts swan on at 9pm
Posted by the Scrapes at 4:58 PM No comments: 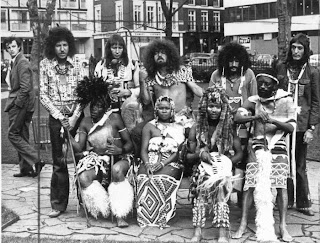 Above pic says it all really. Prog rock from Johannesburg...70s...awesome. A meeting of heavy rock with those instantly recognisable South African choir sounds and tribal touches. Poltical and full of imagery....find it and listen....
Posted by the Scrapes at 1:57 PM No comments:

Swan Districts flying their way up to Bris from Adelaide....

We Scrapes shall be supporting them for a show here in Brisbane, Australia on Thursday the 28th of July at Cartel which exists on Caxton St, in what I believe is now called Paddington but what once was Petrie Tce. It's a coffee shop so it will prove to be a great intimate night of ambient delight or something. We Scrapes will be first up around 8:30pm it is believed. More to come on this....

A short story on Swan Districts. Last year we performed in Adelaide at what was supposed to be a lovely gallery gig. Good turn-out, bad beer...what more could you want??? Unfortunately someone didn't sort out certain legal issues with the local constabulary so the gig was cut short and we and Swan Districts didn't get to play...LUCKILY...someone in the audience was involved in another space nearby so those of us with the necccessary cajones moved onto this next space and played a quiet set in the basement...Swan Districts and us Scrapes...they were troopers for doing it and they gave us some tapes as well which are killer. We listened to them the next weekend in Hobart looking at the mountains and drinking good beer. These guys are coming to Brisbane and trust us Adelaide isn't only responsible for abominations like Hilltop Hoods and West End Draught...they also create some good droney guitar rock a la Spaceman 3 with even more mogodon up em....so come to Cartel God damnit...
Posted by the Scrapes at 9:06 AM 2 comments:

Posted by the Scrapes at 9:03 AM No comments: 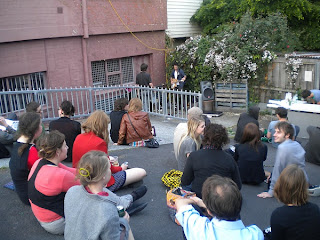 Posted by the Scrapes at 5:04 PM No comments: