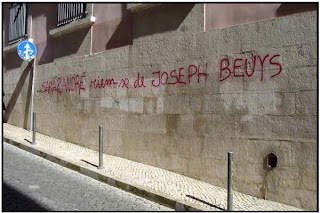 
Sara & André is a collective formed by two artists. Their ironic and hybrid work is very much influenced by conceptual art, reflections on the art system, the star system (Paris Hilton, Lady Gaga) and aesthetic partnerships of 'togetherness' (from The Carpenters to Gilbert & George). They are interested in the questioning of authorship and originality. Their work reflects the 'skipping of steps', reaching directly to the stage of recognition, as in the video series "Claim to Fame" where they are followed by a flock of paparazzi.


The exhibition Sara & André at INFLIGHT will comprise of documentation of series produced between 2005 until the present and previously shown on several occasions across Europe. This survey format will present a narrative of the collective’s coherent practice, in its first presentation to Australian audiences.

Sara & André at INFLIGHT is part of INFLIGHT’s International Exchange Program, which aims to establish a network between Tasmanian and European artist run initiatives.

rosalux: This non-for-profit initiative is named after the Rosa-Luxemburg-Platz, an urban interface between two creative districts of Berlin: Mitte and Prenzlauer Berg.

rosalux exhibits works of conceptual and performance artists who have not had the opportunity to present themselves in Berlin so far and projects rarely seen in commercial galleries. It is the primary goal of rosalux to work in a concrete manner, thus questioning the conventions of the art market and also individual artistic practice. It is the aim of the exhibition projects to initiate a process of reflection and an open dialogue with the artists and the public.


INFLIGHT would also like to announce that very special guests The Scrapes from Brisbane will be performing at the opening of this exhibition at around 7:00pm

The Scrapes at Inflight

www.myspace.com/planetofthescrapes
http://www.inflightart.com.au/
Posted by the Scrapes at 10:07 PM No comments: 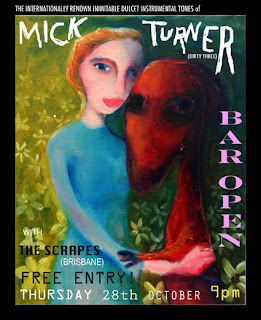 We shall be playing a gig with Mick Turner (Dirty Three, Bonnie Prince Billy, Cat Power etc.) on the 28th October at Bar Open in Fitzroy, Melbourne, Australia. Free entry.
Posted by the Scrapes at 3:52 PM No comments: