Posted by the Scrapes at 5:14 PM No comments:

The preparations have been made...Our BANDCAMP page has been updated with our entire discography (more or less) to date. We have also added an option to order one of the last 50 Kali Yuga Sunrise vinyls available directly from the band.

The cult soundtrack to an unmade film PRISON HALL has been updated with incredible new art from Reuben A. Warburton, the creature responsible for the layout on The Songs of Baron Samedi art, including the striking hand-drawn and typed fonts you'll find all over the package once it's out. Here it is: 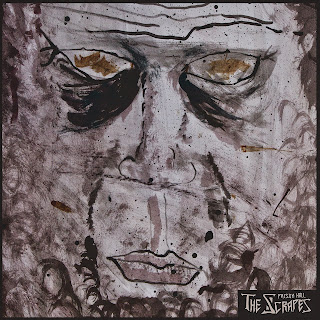 Tattoo ink, blood...and something else...we question not how the man werks.

Reuben is also responsible for the Oblivion's Grip video that's circulating about at the moment....circulate it further:

That is the first piece to open up THE SONGS OF BARON SAMEDI which is incidentally out on cassette and digital (US regions) on SOFT ABUSE records on 28 APRIL 2015 and out thereabouts too on heavyweight beautiful vinyl through Brisbane label CONQUEST OF NOISE not to mention out digitally for all other keen listeners through our own BANDCAMP PAGE which incidentally I may have just mentioned has been updated with our entire discography INCLUDING THE LONG OUT OF PRINT OUT OF ORDER FIRST SELF-TITLED 2009 CDR which Julian Cope the Archdrude said this about:

"Also hugely enjoyable, highly original AND psychically useful is the music of Australian duo The Scrapes, whose fiery epic guitar and abandoned Mithraic fiddle pieces evoke images of lost Keltic lands inundated by the oceans, lost Iberian & Armorican sea peoples and lost times from beyond the beyond. Mostly, violinist Adam Cadell conjures up a fabulous and heathen see-sawing from his machine, kicking up a down home/back porch Henry Flyntian dust that guitarist/axe wielder Ryan Potter orchestrates with apocalyptic power chords and huge crunching rhythms. At times it’s like Kid Strange and Urban Blitz from the Doctors of Madness at their most morose played Overhang Party, or a mogadon’d Peter Hammill jamming with Van Der Graaf’s Graham Smith. Elsewhere, the singular desolation is most reminiscent of the most down down moments of Nico’s THE MARBLE INDEX or even of Jesse Colin Young’s The Youngbloods at their most mercurial. But the Scrapes are still so original their music ultimately don’t sound like nobody but themselves. And just who on Mother Urth [sic] could feel compelled to include a rhythm section in their new band after hearing music this ardently real AND which can be achieved by just two true Motherfuckers?"

So from these 2 true motherfuckers we say get your arses to the CHARDON'S CORNER HOTEL, ANNERLEY, BRISBANE 7 MARCH for the BURGER REVOLUTION 5:30pm.

Revoltingly,
Das Scrapes
Posted by the Scrapes at 6:17 PM 2 comments: