English coppers have alledgedly made pre-emptive strikes on squatters and dissidents before the bullshit royal wedding...hmmmm and it's the same western powers that show "outrage" when the Chinese government starts doing the same thing to its people...

Read the article here: http://www.news.com.au/breaking-news/twenty-arrests-ahead-of-royal-weddding/story-e6frfku0-1226046630888
Posted by the Scrapes at 8:31 AM No comments: 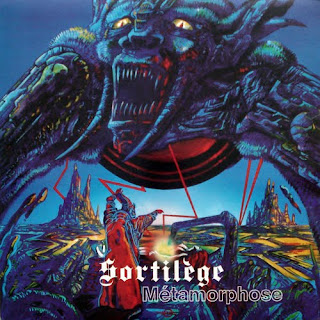 SORTILEGE - The fucking sweetest metal band I've heard in ages...other than Metalucifer that is of course...pinched this from Wikipedia:

The band was formed in 1981 with Christian Augustin on vocals, Daniel Lapp on bass, Jean-Philippe (Bob) Dumont on drums and Stephane Dumont and Didier Demajean on guitars. Originally, the bands'name was Bloodwave.

The following year, the quality of their repertoire and their concerts in France improved so they were hired as an opening act for Def Leppard on their tour in France. Since none of the French record labels wanted to offer them a recording contract, they signed for the Netherlands label Rave-On Records. A few months later, the band recorded an EP titled "Sortilège" which was successful. With this initial success, the band signed to the French record label, Madrigal. A few weeks later, the band went to Germany to record their first album Métamorphose. This was again a success, especially in France and Germany.

With the success of Métamorphose, the band played in many international festivals and became popular in Germany, Netherlands, Switzerland, Belgium and France. Feeling that their French may harm global sales, the band decided to re-record their album Metamorphose in English. However, the English version of the record sold poorly everywhere except in Japan.

In 1986, Sortilège released their last album, Larmes de Héros. Like the previous album, it was recorded in Germany. At the same time they recorded an English version, which again sold badly.

Tired of the lack of public support, and difficulties encountered in relation to record companies, Sortilège decided to split up in 1986.

Get a copy of the album METAMORPHOSE whereever you can...it is truly soulful metal. You can find a thieved copy of it here: http://www.mediafire.com/?omitmw0zjmm
Don't think the band would mind since they broke up 25 years ago...
Posted by the Scrapes at 9:27 AM No comments:

Posted by the Scrapes at 2:08 PM No comments:

Thanks to those boys for a good time in Sydney...

The Fiddler from lulabelle on Vimeo.

Posted by the Scrapes at 9:25 AM No comments: